As the Chicago Air and Water Show reaches its 60thanniversary, there are plenty of reasons to celebrate. When the first show was hosted in 1959, it managed to captivate the city with a relatively tame lineup of events. Over the years, its wild popularity led to more impressive additions being added to their roster. What started Was simple water ballets and diving competitions quickly evolved into spectacular air shows. Led by the U.S. Air Force Thunderbirds and Golden Knights Parachute Team, the show started hosting breathtaking areal stunts in only its second year. The views are especially astonishing aboard from a private yacht, get your own Chicago air and water show boat rental.

Today the Chicago Air and Water Show is one of the city’s most treasured traditions. Drawing in an impressive audience of over a million visitors per year, this is one of Chicago’s most exciting attractions. From jaw dropping areal stunts to surprisingly intense feats on the water, this event showcases our fascination with pushing the limits of what’s physically possible. Tandem teams of parachuters jump 12,500 feet while others exceed 180 mph after diving out of airplanes. These stunts are so impressive that they have firmly engrained the show into Chicago’s culture. Imaging watching this while enjoying a Chicago air and water show yacht party, with the stunts happening directly above.

Despite being adored by millions, there are plenty of things that fans don’t know about the Chicago Air and Water Show, fortunately you can learn this aboard our Chicago air and water show boat rental. From epic cameos to near disasters, this event showcases the ups and downs of working in the entertainment industry. To showcase what makes the Chicago Air and Water Show unique, we complied a list of its most interesting facts. These entries provide an intimate glimpse of this amazing event, so prepare to dive into the rebellious side of the American dream! 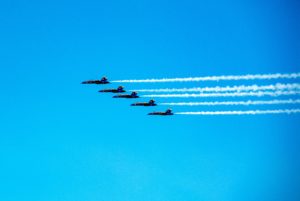 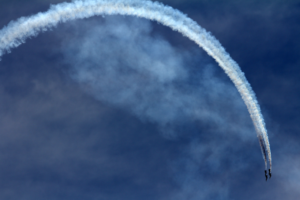 Fact #1: Bill Murray Parachuted into the 50thAnniversary –This air show is no stranger to A-list surprises. During its 50thanniversary in 2008, the organizers added celebrities to the lineup. Actress Florence Henderson opened the show with the National Anthem, but Bill Murray upped the ante. The Chicago theater alumni joined the Golden Knights and parachuted into the show. This appearance by Murray was so amazing that it helped the show generate a record amount of spectators.

Fact #2: Biggest Close Call –During the 2005 show, a stunt being perpetrated by the U.S. Air Force Thunderbirds almost turned deadly. While executing a diamond formation slow-roll pass, one of the aircraft’s missile rails hit the stabilizer on another jet. This caused a four-foot section of the missile rail to snap off, which immediately fell into the safety area. Fortunately, both planes were able to land and no one sustained injuries. This brush with death was the closest thing to a major disaster that the Chicago Air and Water Show has experienced. It’s amazing what a difference a few inches can make at 400 mph!

Fact #3: First Show Had $88 Budget –It’s hard to imagine that this larger than life event started with extremely humble beginnings. Boasting a budget of $88, the first Lakeshore Park Air and Water Show made its debut in 1959. At the time it was a Family Day celebration for children who were enrolled in Chicago Park District’s day camp. It only featured water skiing, dive competitions, a Coast Guard Air Sea Rescue demonstration and water ballet. Despite this nonplus lineup, it wetted the public’s appetite for daring stunts.

Fact #4: Record-Breaking Attendance Rates –Boasting over 1.5 million spectators, this is the largest free air and water exhibition in the United States. Around 64% of viewers are from Chicago, with 22% hailing from the neighboring suburbs. Even though these figures are impressive, they pale in comparison to the crowds attracted during the show’s 50thanniversary. Bolstered by celebrity cameos, the event drew a record 3.1 million spectators.

Fact #5: No Casualties Until 2015 – Despite having participants defy death in every show for decades, no one experienced a fatal accident until 2015. This is due to the strict safety regulations and precautions that are implemented by all participants. On top of only flying over a set safety area, both pilots and air personal go over weather reports every morning. This wise mixture of daily planning and strategic execution managed to keep participants safe for 56 years.

Unfortunately, all the precautions in the world couldn’t eliminate one freak accident. On August 16th, 2015, Master Sergeant Corey Hood accidentally collided with another parachutist in midair. He sustained injuries that proved to be fatal after plummeting to the ground. This incident sparked debate about ending the show, but its impressive track record couldn’t be ignored. These stunts truly are death defying, and the show exudes too much responsibility and respect for its participants to be dismantled.